"He's been staring at you for nearly thirty minutes now." Sally said, as she watched Sherlock over John's shoulder.

"I know." John replied, squatting down to poke at something buried under several weeks of old newspapers.

"Then why don't you do something about it? We can all tell you want him too and frankly all the staring is getting a bit creepy." She shifted a little as Sherlock's gazed shifted momentarily to her and turned hard and cold.

"I've lived with Sherlock long enough to know that he doesn't appreciate things when he's just given them.

His brother gives him everything he asks for and in return he is disdainful and mocking.

Lestrade gives him all the really crazy cases and in return Sherlock treats you all like mildly disobediant pets.

Dear Mrs Hudsion, probably the only landlord in London willing to put up with him, gave him a place to stay and in return he treats her like a maid and shoots holes in her walls. "

John paused thinking through his thoughts.

"On the other hand, when he has to work for it, has to make the first move so to speak, He treats it like the most precious thing in the world.

Did you know he didn't learn to play the Violin until he was at university?

His mother thought that any instrument other than the Piano or Harpsichord was plebian and thus, not worth the time for her boys to learn. But Sherlock wanted to play the violin more than anything and eventually found a way to afford a violin and a tutor.

I want that if we ever have a relationship. I want him to see me as something precious.

So, even though it kills me, I have to wait for him. I have to pretend not to know, not to feel his eyes on me everywhere we go."

John stood, brushing the dirt from his jeans and turned to leave.

As John came up beside him Sherlock manuvered himself to where the two of them were practially touching as they walked out of the crime scene.

Just before they turned the corner Sherlock plaed his hand on John's back and leaned down to speak in his ear. John laughed.

Sally could imagine the look in Sherlock's eyes. She almost felt sorry for him.

The world trembles into stillness, waiting in that eternal moment between one breath and the next to start spinning again.

In one universe a soldier cowers back from it afraid of the consequences and what peace the two men had managed to find is irreversably shattered.

In another two souls come together in a violent meeting of flesh and relief.

In a third the detective's kiss presses to the cheek instead of the lips and there is never another less than chaste touch shared but the love is felt all the more strongly for remaining unconsumatted.

In yet another a man is mortally wounded when he shouldn't have been and the moment passes unremarked except for the shortened lonely life of the second man.

In this universe a tall man with a godlike intellect waits with the world for his blogger's answer.

Sherlock never before believed a person's life could be so irrevocably wrapped up in another's words, but as the moments pass he feels his heart begin to crack and tears start to gather.

"Don't be an idiot." John says with an affectionate smile.

He runs a hand through Sherlock's hair until he can cup the back of Sherlock's head and pull him down into a sweet, soul-searing kiss.

"Let me get my coat." John says with a laugh.

They walk down the street hand in hand.

As the world begins to spin one more it's almost like nothing has changed at all.

I should probably not be as amused by this as I am.

And for those of you who are worried about clicking the link: it's practically GEN and mostly cracky.

And much thanks to Andie for sending me the link first. <3 you!

He is 21 inches long

He has black hair.

This is my first Horror story. I would appreciate some feedback on it but it isn't necessary if you don't like horror. Thank you.

Also, this is what happens when I read the High Octane Nightmare Fuel TVTropes page at 2 in the morning. Then listen to the Ting Tings. 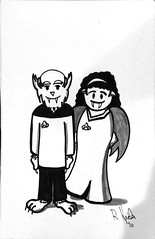 Originally uploaded by jlh_lunasea
At Emerald City ComiCon I was told by the fabulous Artist that I had inspired her to do a ST version of Little Vampires and here it is! <3

Why is Johnny Weir so sexy on the ice but not off the ice?

Seriously, they should just set up a pole on the ice and let him go for it.

After watching the opening to the emmy's again i have come to the conclusion that NPH needs to record a cover of Luck Be A Lady.

I'm usually pretty protective of the rat pack's music, but I think he could pull it off.
Collapse